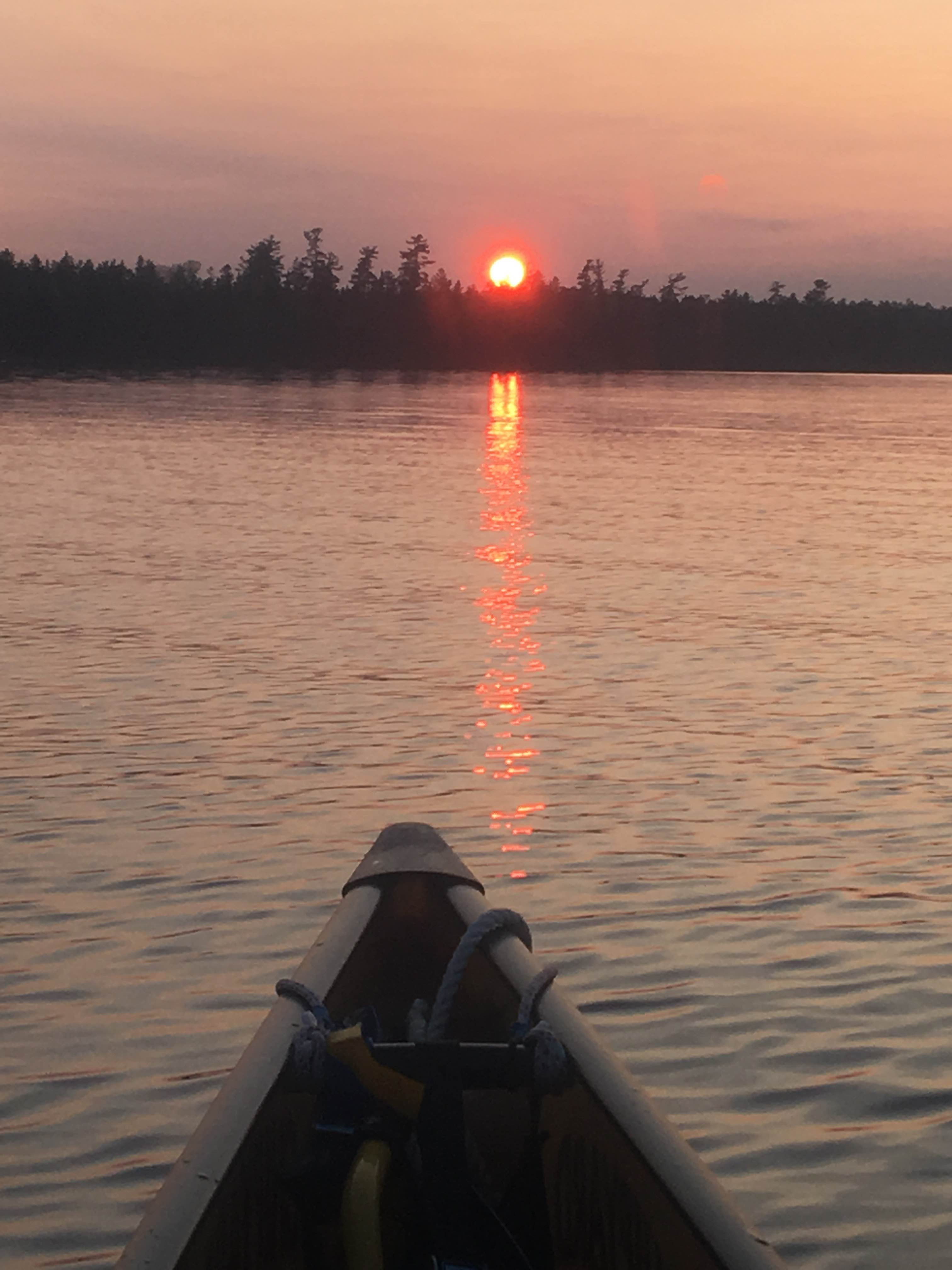 On the Allagash Wilderness Waterway

With the dreaded Mud Pond Carry behind me, I crossed Mud Pond with a setting sun. Thankfully the stream exiting the pond and pouring into Chamberlain Lake had just enough water to paddle. The lower third required tracking my boat, as it was to Rocky for a Kevlar canoe.

I set up camp and had dinner. On my way to the campsite the sunset was spectacular and as the sun set the moon rose on the opposite horizon over Mount Katahdin in the distance. An image that will be forever at in my mind.

I got an early start the next morning with not quite enough sleep. However, I was anxious to get going. Finally, on the Allagash Wilderness Waterway the end of the Northern Forest Canoe Trail was in sight.

There was barely a breath of wind and the lake was calm while I made breakfast and packed up to go. I don’t think I’ve ever seen so many black flies in my life. I don’t know how moose and other critters manage without head nets and bug dope. I would be immersed in water and breathing through a snorkel.

Have you ever tried brushing your teeth while wearing a bug head net? The black flies pestered me the entire day. When I got in my canoe I was being swarmed and no matter how hard I paddled I could not leave any of them behind. A light breeze developed which excited me in hopes that it would blow some of these nasty little buggers away. At least enough of them so that I can take this Hadnet off. It wasn’t long before the wind started to really pick up and call the question about when and where I would make my mile and a half crossing to the other side of the lake.

The wind direction was such that if the wind blew much harder my crossing would be difficult so I decided to go now. 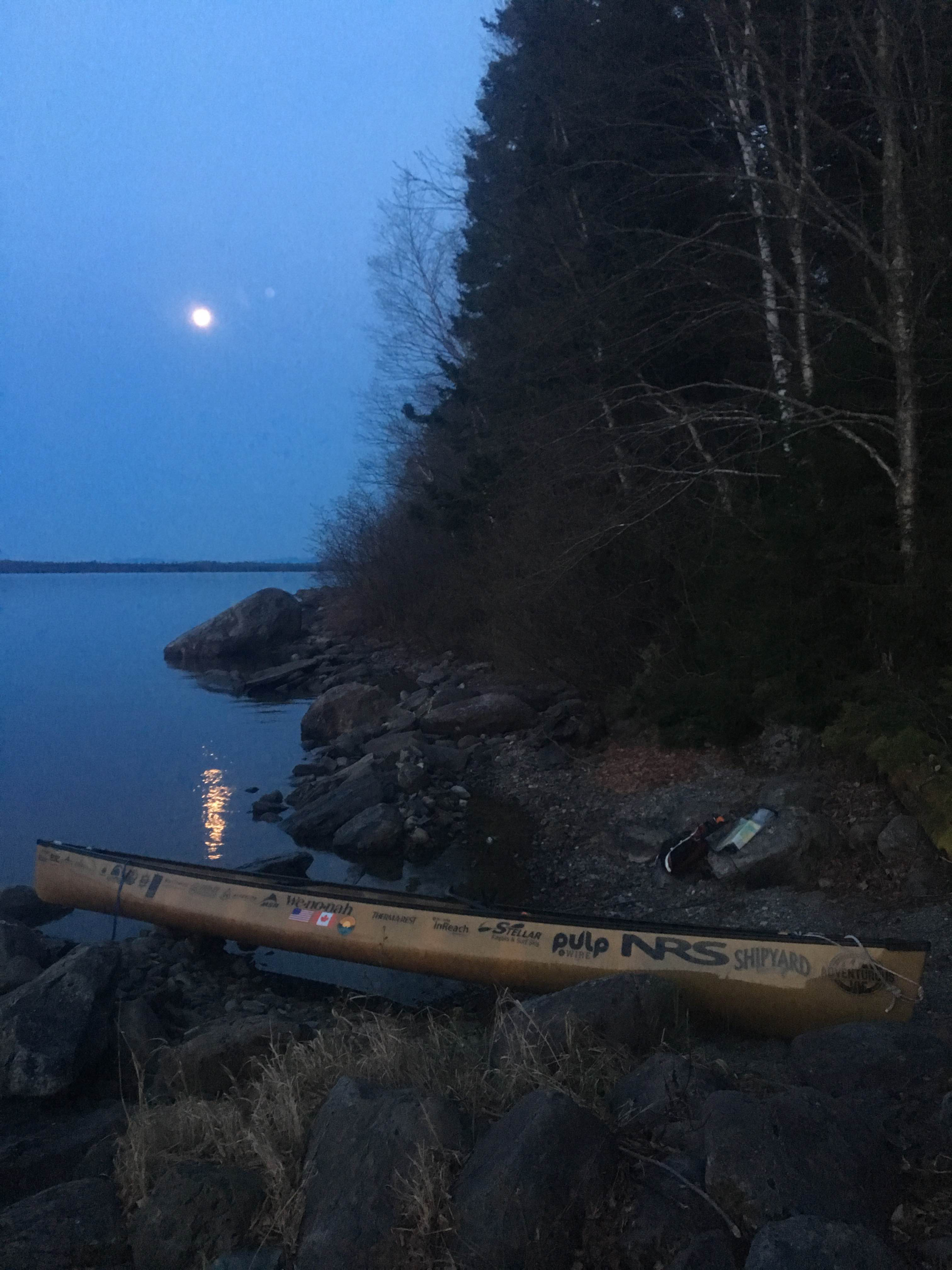 This gave me time to think more about my hitchhiking friends. Black flies like to hang out in your wind Eddy. Utilizing that calm air to hang with you, they continually fly into you grabbing on to whatever they can find to hopefully find a way to a sensitive spot where they can suck your blood. If you are not wearing a Hadnet they will fly into your hair and then pull themselves hand over hand, and they have a lot of hands, toward your scalp for a feast. These guys have an anesthetic that they administer so you cannot feel their weight. It’s like they slash your skin and then lap up the blood unlike a mosquito that comes equipped with a hypodermic needle. I have seen blood running down from behind peoples ears before and they didn’t even know they were being bitten. I am wearing a Hadnet but still have not used bug dope. I try to stay clear of that stuff because it’s so nasty, it will melt the fiberglass on your paddle.

I paddled to lock dam for a short portage into the stream leading to Eagle Lake. Ironically, the very first thing I saw as I entered the lake was a beautiful bald eagle in the top of a white pine tree standing guard over his favorite fishing hole.

I continued up Eagle Lake to the site of the tram way locomotives that stand resting in the woods from the logging era.

One thing that has really impressed me on this journey is how much man has altered rivers and waterways to suit his needs. The number of dams is impressive and here on the Allagash, the dam at Lock Dam, and the one at Telos, were created to divert the flow from Chamberlain Lake so that logs could be floated into the Penobscot watershed and to the paper mills in Millinocket.

Lock Dam had locks where wood could be brought up from Eagle Lake into Chamberlain and on to Millinocket. Later the locomotive and railway tram between Eagle and Chamberlain made the locks obsolete. It’s interesting to see the extent that paper companies went in order to get wood from the forest to the mills.

The wind died down a bit and was more favorable for my direction of travel for the balance of the day. I arrived at Churchill Dam and talked with the ranger. While I was speaking with him, a man drove up in a pick-up. He made light conversation and began asking questions about my canoe. He said he had been drawn over here by this Kevlar boat and wanted to find out more. Stopping mid sentence, he said, “Hey you look familiar.” I told him he looked familiar to me as well and introduced myself. As it turns out, we knew each other from canoe racing years ago. Again, I am impressed with what a small place this huge state is. The rest of the world is 6° of separation, but Maine is one half degree of separation. As it turns out the forest ranger and I know a lot of the same people as well. It feels good to be back in Maine. Tomorrow he will open the gates on the dam to release a flow for canoeing. So tomorrow morning I will paddle Chase Rapids and continue my way down the Allagash River.

I have never seen so many ants in my life. They look like carpenter ants and outnumber the black flies. They are getting in all of my stuff and flying onto me. This is a beautiful place, but I am looking forward to leaving.