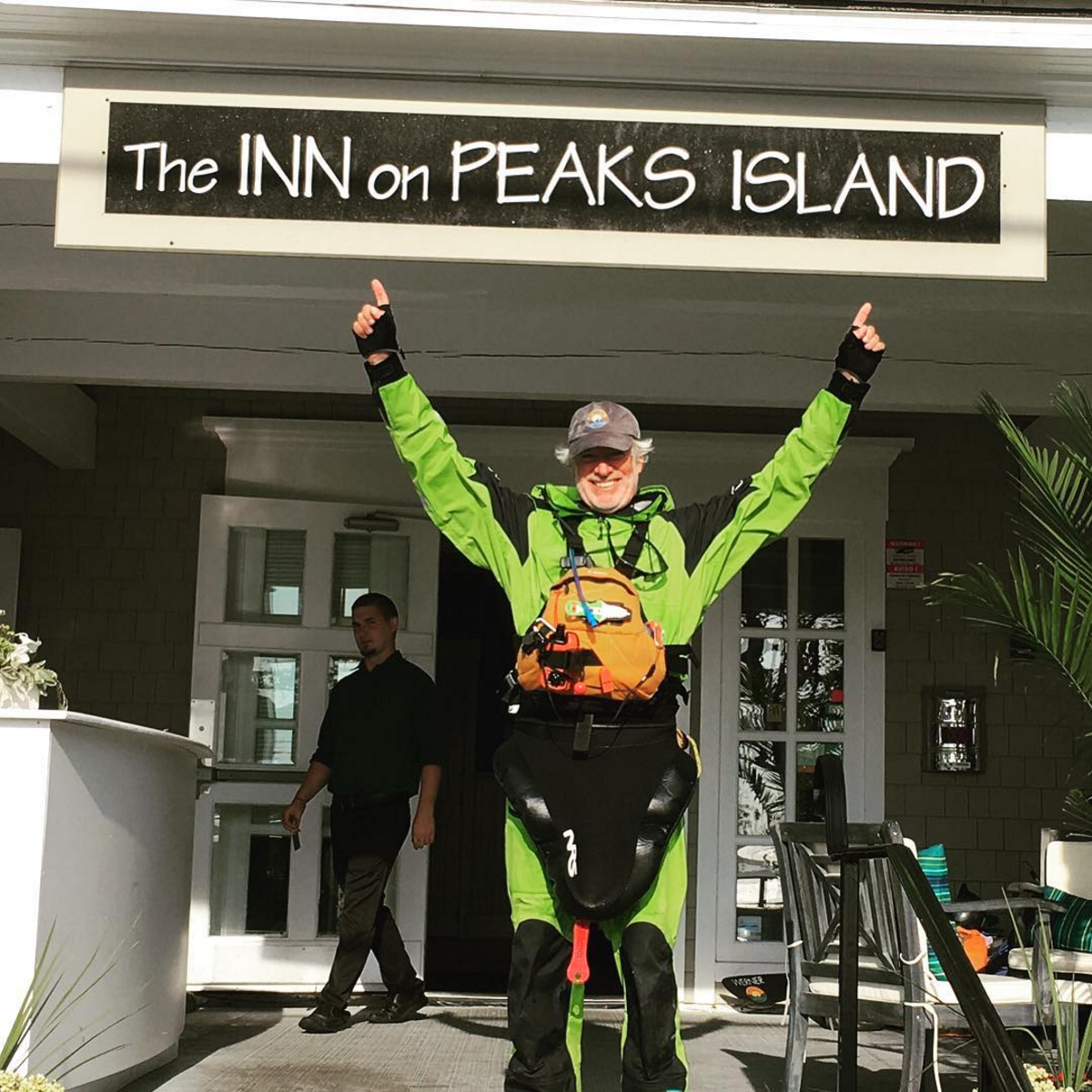 Dan Carr and I departed New River Beach Provincial Park in pea soup fog with only 25 yards of visibility. GPS navigation took us past numerous aquaculture salmon pens and vertical cliffs with ocean swells exploding at their base. Ethereal and unsettling as it was, it was both intimidatingly powerful and awe-inspiringly beautiful. The sound of unseen fishing boat engines added to the drama, since we were invisible to their radar. We announced our intentions and location on VHF radio, but got no response.

As the fog lifted, I experienced my first puffin flyby and paddled close to razorbills not long after. The landscape felt so foreign that I was especially wary of the natural forces that surrounded me, becoming wary of making a consequential mistake. I knew it was all in my mind, but it took conscious effort to keep my mind calm and body loose to flow seamlessly with the impulses of the disturbed ocean.

The rest of the day’s 35-mile paddle shifted from opposing to favorable tidal currents with virtually no wind or swell to signal impending thunderstorms. I returned to GPS blind navigation in dense fog for my landing in Lubec, Maine and my return to the USA for the final time on PaddleQuest 1500!

A layover day at Cohill’s Inn and Tavern was required due to forecasted thunderstorms during our anticipated traverse of Maine’s fabled Bold Coast, where 100-foot cliffs stretch for miles, offering no refuge in storms.

Another botched forecast! We left Lubec in the high winds and seas that had prompted a small craft warning. Ginormous ocean swells came at us, carrying acres of water, chopped by wind-driven waves jacked up before us. Rebounding waves from the cliff bases made for white knuckles and the need for meditative exercises to keep things right side up. We were definitely in a “no-roll / no-swim” zone. I could feel the sweat pooling up in my dry suit!

With tired bodies, frayed nerves and the day’s shadows growing long, we opted to stealth-camp at rugged Moose Cove. The next morning served up glassy conditions until we neared Cutler where the current and wind conspired to challenge our boating skills. We finally made it to Cross Island, where we sought refuge in an old house used by Outward Bound participants and passing kayakers. After another 13 miles we reached Machias, where I parted with Dan before heading home to southern Maine to meet my incredible wife, Nicole, for a much needed resupply.

Solo again, I left Nicole for Halifax Island and a night tucked into my Hyperlite Mountain Gear shelter amidst the rain and fog. This is the island where the British ship Halifax ran aground before American patriots procured the ship’s gunnery. Later, these cannons fired the first shots of the Revolutionary War from the banks of Machiasport, Maine. Coincidentally, I was on this island for that anniversary! What a history we have. Let’s not goof it up!

The next morning, everything I own was drenched in rainwater or permeated by fog, I packed up for my earliest start yet. I couldn’t see the end of my boat in the fog, but the seas were calm. I needed to make miles in the mist, and was grateful that navigating on my iPad with DeLorme inReach would serve me well to do so.

I passed Jonesport where inquisitive seals popped up periodically in the fog. A thunderstorm of Armageddon proportions bore down on Narraguagus Bay, so I stroked for cover at the Maine Island Trail site at Bois Bubert. The temperature dropped 15 degrees and calm seas began to build bigger with winds approaching 20 mph. I continued to the infamous Petit Manan Point, with its bar extending out to sea to create huge, breaking waves. Rounding the point, I persevered to Corea Harbor, hoping for lodging. My prayers were answered by a phone call from Nicole, who announced that a 3.5 mile paddle around the next peninsula would lead to a B&B waiting for my arrival! Cold, wet, and miserable, with 35 miles behind me, I didn’t wait an instant. I paddled 3.5 miles into a 15-20 mph headwind for the roof that would protect me from the half-inch of rain forecasted for that night.

Acadia’s Oceanside Meadows Inn was an absolute oasis. Its host, Ben could not have been more accommodating! He supplied me with great food and an awesome night’s sleep to fuel the next day’s paddle around Acadia National Park’s potentially terrifying Schoodic Point.

I’ve heard tales of terror about rounding Schoodic Penninsula by kayak; intense currents, giant swells, and pounding waves rebounding off of granite cliffs all threaten to repel even the most intrepid mariners. It lived up to its reputation.

The paddle across Frenchman’s Bay to Bar Harbor was no picnic. When I’d finally reached dry land, I was preparing to wheel my kayak to my motel. From the abutment above, a collection of curious onlookers questioned the oddly dressed man with the little boat. “That’s a cool thing you’re doing, dude! Wanna beer?” Before I knew it, it was raining cans.

The next morning, my wheels failed on the way to put-in. Katy from Coastal Kayaks and Bikes rescued me by bringing her sunny disposition and a rugged baby cart with bicycle wheels. We set the loaded kayak on top and I was at the put-in within ten minutes! Thank you, Katy!

Again, the forecast was wrong! Instead of being sheltered, I enjoyed a full-on wind swell and wind waves with opposing ocean swells as I paddled down the entire length of Mount Desert Island and Acadia National Park. More white knuckles!

On to Southwest Harbor for lunch and a Shipyard photo-op at Little Notch Cafe and Bakery. Then, on to a MITA island at the head of Bass Harbor where no-see-ums and mosquitos thought I was the best thing ever to happen for them.

Calm seas met me in the morning with an outgoing tide. I headed to Old Quarry Adventures in Stonington to see Captain Bill, who was preparing for his Coast Guard inspection. Two cheeseburgers later, I navigated a big crossing to Vinalhaven and paddled on to Hurricane Island for the night.

I was grateful for calm seas when crossing the expansive Penobscot Bay. Interesting how you can smell a sweet, comforting potpourri of soil, vegetation and flowers when landfall looms close by. Muscle Ridge is a beautiful chain of granite islands offering protection from ocean swells. The fragrance of beach roses wafting off small islands is purely intoxicating. Seals and osprey abound, and one feels like slowing to fully enjoy the place. But off I must go!

Approaching the lighthouse in Port Clyde (made famous by Forest Gump) I saw a figure onshore waving arms and yelling, “Hey, John Connelly!” It was my friend Scott Dalrymple, whom I worked with at L.L.Bean. His family is long-established in the area and he had been tracking me on the PQ1500 website. We had lunch at the Dip Net Restaurant, I did another photo-op for Shipyard, and off I went to camp at the Black Island MITA site in Muscongus Bay.

An incredible sunset was followed by a flat, calm morning as I rounded Pemaquid Point, which later proved to be not so calm. Before the point, I intercepted two minke whales, the second no more than 75 yards away, followed by a pod of harbor porpoise, one surfacing a boat length away and eyeballing me as if figuring me out. Spectacular!

Nicole met me in Boothbay Harbor along with my daughter, so did Elizabeth, for an early Father’s Day dinner. A little hot tubbing that night and I was off to cross the Sheepscot and Kennebec Rivers and on to the welcome home waters of Casco Bay!

Nicole surprised me with lunch at Popham Beach and off I went on a 13-mile crossing to Bailey’s Island for dinner with Nicole and some pals and an overnight stay at a friend’s house. Getting close to home has its perks!

Despite another wrong forecast and small craft warnings, I headed 16 miles to Portland Harbor where I was welcomed by a cannon shot from the privateer tall ship Lynx and treated to a Shipyard Brewing Company Export Ale by Shipyard’s president and good friend, Fred Forsley.

Nicole and I then headed to The Inn on Peaks Island so I could wait out the next two days of high winds and thunderstorms before I resume on my final 50 miles of PaddleQuest 1500. If you need a place to chill for a couple of days, this is it!